Its been quite a while since our last outing in february with the layout but the team has been busy during this time working on some challenging and interesting new items of stock ready for our visit to the Taunton and Spalding exhibitions in a few months time.

During this time we have also written a couple of articles about the Layout and stock.

The layout has appeared in the spring issue (MR181) of Model Rail and the photos by taken by Chris Nevard were really great (You truly can polish a Turd!). 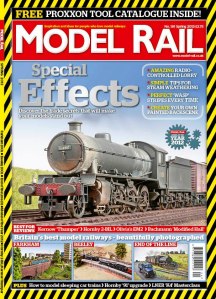 Heres are a pic taken by Chris which has had some cloud cover added.

We have also recently had an article published about our model of the RM74 Ballast Cleaner in the Railway Modeller (issue July 2013).

With quill and ink pushed to one side for a while at least, work has recommenced on working through our list of new stock for the layout. The list is split (unequally and unfairly) into short and longer term projects, our only headache being which stock to remove from the layout to make way for the new stuff.

A recent sort through of stock has seen at least 5 of our older train formations consigned to the store cupboard. This means that in the last 3 years nearly 50% of the stock on the layout has changed.

Heres a taster of things to come! – CAN YOU TELL WHAT IT IS YET!

We are struggling to tell and we are building the thing!!!!!!