Last weekend (26th & 27th October 2013 for those reading this later) we were invited to Railex Taunton (also dubbed the Taunton Eat-A-Thon by the team) organised by the Somerset Railway Modellers Club. The show was really busy over the two days with some nice layouts on display. the layout was very well received as we havn’t ventured down to the southwest previously. This show we were joined by fellow club member Steve (known as Ramrig to people on RMweb) who helped out throughout the weekend.The show was thoroughly enjoyable, with the catering reaching almost legendary status for an exhibition (although the after effects of a double helping of cauliflower cheese made the air in the van chewy on the way home) – other shows have a lot to live up to on this front. Thanks to all the SRMC members for making us feel really welcome.

The title of this blog update relates to an episode whilst loading the van on friday morning. to operate a tail lift you press a button to go up, one to go down and if you want to stop at any point, you just take your finger off the button. Ever wondered what goes on in peoples heads – I have!!!. One of our operators (wearing his tail lift operating clothes!) struggled a bit with this complex set of controls and whilst holding the button to raise the tail lift decided to shout STOP STOP STOP at the top of his voice and then realised afterwards that he had his own finger on the button!!

This show saw a few new items on the layout. We have been working on some of these items for a long time  and it was good to finally get the on the layout. Attached are a few pictures of the items.

No these are not LIMA! – whilst it may just look like a sprayed up lima PCA, it is actually a heavily converted PCA . The ends have been re-profiled and tapered (honest) and new walkways and additional hatches have been added to the tops. New transfers and a good dose of weathering  complete the models.

Another new model was the 2 car parcels unit – converted from the DC Kits 114 model, the unit is in the distinctive parcels red livery – Now this is complete, we assume one of the retailers will decide to make a model of one. 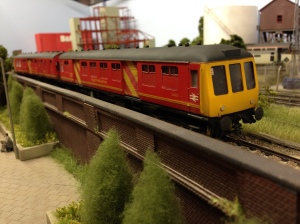 Also new to Farkham was our Overhead Line train. Unfortunately timed to coincide with the southern pride models kit – this are definitely not the southern pride kits. Based upon record photos taken of the train formation at Portobello, Edinburgh, the train is based upon 4 heavily converted Bachmann MK1s with new roof and ends and lots of etched brass / stainless steel attachments. They are painted in the traditional engineers olive-green and lightly weathered. The 5th vehicle in the train is the cable drum carrier which is a  scratch built chassis with etched mesh floor and etched cable drum holders. 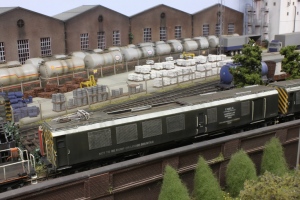 This completes our update from Taunton. We are out again on the 9th & 10th november at the Spalding Show, which we are really looking forward to. Hopefully we will see some of our friends to share a LAGER with.