Finally got round to updating the blog with our most recent events.

Farkham attended the clubs annual local show on the first weekend in October. This is a chance for our club members who don’t go to any exhibitions to see the layout rather than in its usual stacked and boxed form.

The show as every is a family orientated event but gave us the chance to try new bits of stock and make a couple of repairs to existing items.

This years event was particularly noteable for two reasons

1) Roomey came out of hibernation and returned to the Farkham fold – so the team were back up to full strength (well as strong as it gets!!).

2)Three new wagons that had been promised previously on several occasions(modelling at glacial speeds!!) finally arrived. 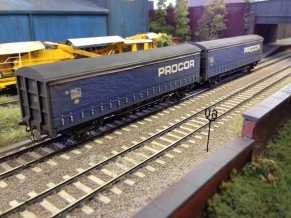 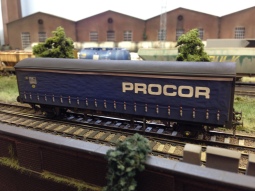 The Vans are significantly longer than the RTR Hornby model and have utilises elements of the sides of several of the Hornby wagons fixed together, the rest of the wagon being scratch built.

These wagons will now displace some of the VGAs and VEAs running in the yard on the layout.

Also new and based upon similar ‘Stock’ is the Campbells soup Van.

Whilst we are reliably and emphatically informed by the builder that this is in fact a massively modified conversion of the original Hornby model, some of us are still not convinced by this, especially the scale coupling!!

OOPS!!,  Sorry posted the wrong picture – here it is below!

Now we are working on new stuff for our forthcoming visit to the Alsager show on 15th & 16th November.